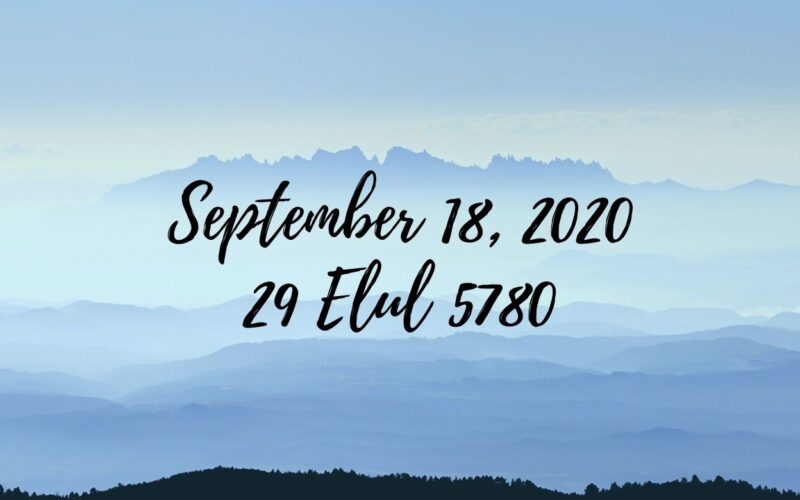 I’ve been pretty emotional the past several weeks, mostly keeping it bottled up because that’s what I do. It’s hard to see the good things when the news is so grim and scary. But there are still wonderful things going on in the world.

On Wednesday, I had the honor of watching a friend’s conversion ceremony. It was beautiful and made me think of my own. My ceremony didn’t have quite as happy a tone, given that my mom and I had fought in the car before the mikvah and it was still tense between us later that day, but it was meaningful and exactly what I needed at the time.

I’ve also attended the bar mitzvah of a former student and another of a friend’s son. It’s always remarkable to me how kids interpret the Torah in such unexpectedly profound ways, which only encourages me to keep teaching.

Rosh Hashanah begins tonight and it looks radically different than years past. I have mixed emotions about that and I also feel wholly unprepared for this precious time. Last year I wrote that perhaps my goal was to forgive myself and you know what? I think I achieved that, at least partially. I let go of past trauma so I could move forward and experience new things. I’ve stopped apologizing in situations where I know I am in the right, rather than apologizing just to keep the peace or because it’s expected. I’m beginning to use my voice more loudly. There’s still many more things I want to do and achieve and I am hopeful.

During my friend’s conversion ceremony, she explained why she chose the Hebrew name Channah. A large part of it was to honor her past and the women who have shaped her. It got me thinking about my Hebrew name, Miriam Ora Tikvah.

Miriam is for my grandma, Maria Rosas Ruiz, who played a large role in my life and still does, 22 years after her death. It also represents the independent and stubborn women in my family, particularly my mom. Miriam is also Moses’s sister’s name and she is the one who began the joyous dancing after the Israelites crossed the Red Sea into freedom.

Ora means light. I’ve battled depression most of my life, only really getting a true understanding and grip on it a decade ago. Finding Temple was an unexpected ray of light at a time when I was having suicidal thoughts and even though my relationship wth the community tends to be uncertain at times, Temple is always a source of light when I need it most.

Tikvah means hope. Depression turns your brain against you and you begin to question anything and everything you’ve done. It lies to you and whispers that you’d be better off dead, that your loved ones would then be able to breathe a sigh of relief. Again, finding Temple at a time when I couldn’t see past the bad things gave me hope. I found a whole new world and the extended family I had been looking for.

I started crying earlier because the beginning of this new Jewish year is so different and feels so lonely, but now as I write this, I think I was actually crying because nothing feels familiar and that’s terrifying for me. But the work the Jewish community has done to keep up our connections has been nothing short of awe-inspiring. It hasn’t always hit the mark and there have been some pretty tough days and weeks, particularly for Jews of Color, but this time has reminded me how much I love this global community.

Shanah tovah! May this new year bring sweetness to us all.