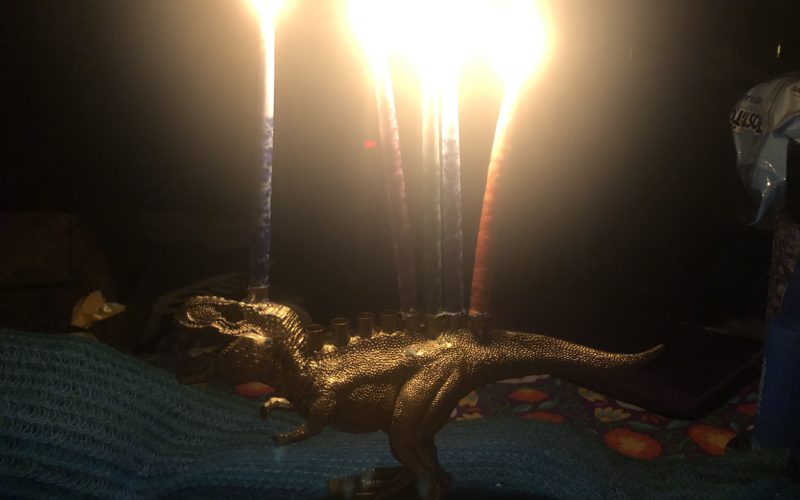 I attended Marra Gad‘s session at Biennial, which was facilitated by Rabbi Jonah Pesner. Marra recently published a book, The Color of Love, about her experiences being a Jew of Color and I’m encouraging everyone I meet to read it.

Let’s set the scene. It was Shabbat afternoon and the room was packed, I’d say at least 150 people, with maybe three or four Jews of Color, not including Marra. I’ve mentioned before that I was pretty emotionally fragile during Biennial, so it took everything within me not to start crying again as I waited for the session to begin.

The first question Rabbi Pesner asked was about Marra’s Biennial experience so far.

When I went to pick up my credentials, I was told that the “REAL” Marra Gad needed to pick up her badge. And when I replied that I was the real Marra Gad, I did not receive an apology. Instead, the person behind the desk said, “Really!?”

When I was eventually given my very bright orange badge that clearly said PRESENTER across the bottom….

I was assumed to be hotel staff. Twice. While wearing my bright orange badge. And told that I needed to do more to get room service orders out more quickly.

I was aggressively asked repeatedly WHAT ARE YOU DOING HERE? And when I would reply that I was a featured speaker on Shabbat afternoon, I was then asked what I could possibly have to speak about.

I ended up in an elevator filled with attendees who elected to whisper about me. What I was doing there. And, again, what I could possibly be presenting about. LIKE I WASN’T THERE.

Stared at. Confronted. Whispered about. And assumed to work for the hotel….It all grew so uncomfortable for me to be out with the general population that I had to be escorted from place to place by URJ staff (to whom I remain profoundly grateful), who saw for themselves the looks that I received simply being in the hallways. When others were at Shabbat services….or dinner….or song session…I was in my hotel room alone. Crying. Because I did not feel comfortable and safe being out with my own people.

There were gasps and sounds of disbelief and I just sat there, not the least bit surprised. I want to be clear, I have not had the kind of obvious and overtly racist experiences that Marra has had. But I can relate to her pain and discomfort of feeling like you don’t really belong in the community you grew up in (Marra) or chose (me).

I posted more about this session here and iit’s been on my mind since I came home from Chicago. I’ve been taking another look at my own local Jewish community and my experiences. I’ve always said that I’m not a person who can sit through services, but is that really true? Or do I choose not to sit through services because, even surrounded by community and sitting with people I know, I still feel very alone? Do I choose not to go to some young adult events because I can’t relate to them or because I’m too exhausted from putting forth so much effort earlier in my Jewish journey, effort that was never really reciprocated? I’ve been avoiding these questions for a long time, but listening to Marra and seeing her strength has planted a small seed of courage that I hope I can continue to nurture.

Towards the end I asked Marra a question. I asked how she has reconciled her faith with the racist experiences she has had, how she has coped, and what she might suggest to someone who is struggling with that right now. She said that it has taken her a long time to become grounded and at peace with her intersecting identities, to the point that she knows exactly who she is and no one can take that away from her, no matter what they say. I know that I am not at that point yet, but I’ve been making strides towards it.

I think this is the first holiday season in a very long time that hasn’t reduced me to tears. I may be lighting the candles alone, but I really don’t feel alone and that’s definitely a shehecheyanu moment.