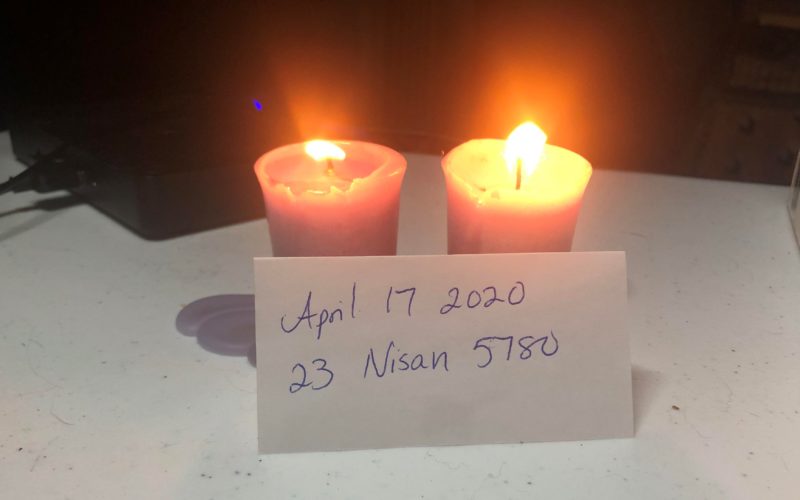 Last Thursday, April 9th marked the 22nd anniversary of my beloved grandmother’s death. I lit a yahrzeit candle in her memory and attended services the next evening to hear her name read.

On Monday, April 13th, my mom and I said goodbye to Bowser, a rescue dog that joined the family over 14 years ago. My mom found Bowser at an SPCA adoption fair at a local mall in 2006. I was away at college and she impulsively brought him home. Bowser was my mom’s partner-in-crime and her perennial favorite out of all the dogs.

He had been sick for several weeks when, on Monday, I heard a crash from the stairwell. I jumped up from my makeshift desk in the living room and saw Bowser laying on his side at the bottom of the stairs. He had apparently lost his balance coming down the stairs and tripped on one of the bottom stairs. He looked up at me and I completely lost it and cried as I called my mom to tell her that he was dying. We spent a few precious last hours with him, telling him what a good boy he was and how much we loved him before taking him to the vet. My mom was inconsolable, at one point telling Bowser that he was supposed to have waited for her. He went peacefully in my mom’s arms.

I’ve been in a haze these last few days, only really realizing last night that I wasn’t mourning the death of a pet, I was mourning the death of a beloved family member. My mom is taking his death much harder. Add to that the shitshow that has enveloped the world and previously acquired worries and it’s no wonder that I feel so close to a breakdown.

I know I’m not alone, physically and emotionally, but it sure feels that way. I’m even less tolerant of people who tell me to be positive or look for the good things and the like. I’m trying, I really am, but the world feels tremendously dark and the house feels so quiet without Bowser barking and running around.

We meet wonderful people, but lose them

We’re, as the saying goes, all over the place.

is more about dogs than about us.

One of the reasons we love them so much.