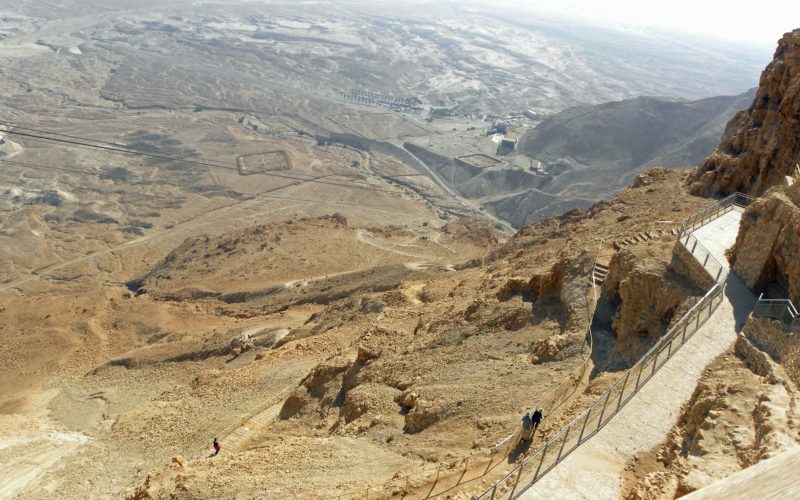 One of the most profound experiences I had while in Israel was climbing Masada. I’m not athletic at all and when I saw Masada for the first time, I wanted to run back to the bus. During the walk up, I was trailing behind everyone else, trying to fend off an asthma attack, sweating profusely, and I kept silently chastising myself for not taking the opportunity to ride the cable car when it was offered. But once I made it to the top, the structures on the top of the plateau and the view made the walk worthwhile.

I had never heard the story about Masada before then. Our tour guide dressed up and played out the story, leading us around the structures, laying the foundation for the shocking end to the story. When he finally told all of us that the Jewish rebels committed suicide rather than be captured by the Romans, a collective gasp went up in the group. But I was more surprised when he asked if we would do the same and most of the group enthusiastically agreed.

I did not. Whether it’s because I grew up with a single mother and had to learn to be independent early on or my stubbornness that has gotten me into trouble more times than I can count, I would have kept fighting. There were Israeli soldiers traveling with us and one challenged me, asking if I would have wanted to see my family killed before I died. I condceded that while that probably would have been the outcome, I would still rather fight because that’s the only way I could possibly see the Jewish community and traditions continue on. He shook his head at me in disbelief, even as a fellow American Jew and then-Naval Academy student agreed with me.

While I was stumbling my way down the snake path, I thought about the answer I gave. When I was studying to convert, one of my teachers told my class a story about a Jewish military man studying at West Point. His teacher went through the history of warfare and touched on most major wars, but never once talked about wars involving the Jews or Israelis. When the student asked him why, he said “Because, according to the history and theory of warfare, they should have lost and been wiped out. But they lived.”

There is a quiet strength in Judaism that I’ve been trying to find for most of my life. I draw strength from my mother, but she won’t always be here and I needed to find a community that I could fall back on whenever that day comes. Going to Israel and seeing a Jewish state thrive in the middle of a volatile desert was amazing and I will never be one of those people fretting about the future of the Jewish people because of that.