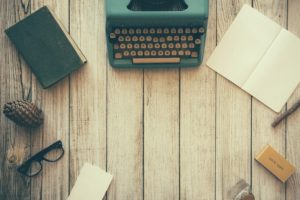 I’ve been writing stories since I was old enough to hold a pencil. You can find half-filled journals all over my room and a variety of writing instruments. It wasn’t until 2014, when I attended the Tent: Encounters With Jewish Culture‘s Creative Writing Workshop, that I started to write more seriously and with a purpose. I write mostly creative nonfiction, (for now) focusing on my tumultuous high school years and my Jewish journey. I’ve never shared my work outside of writing workshops, but hey, it’s a new year, so let’s get crazy.

A wise woman once said, “As long as you know God, then it doesn’t matter what religion you belong to.” Actually, that woman is my mother and she conveyed those words to me just over a year ago when I informed her I would be taking a conversion class at Temple Emanu-El.

I remember feeling terrified about telling her I was moving away from the Christianity I was brought up with. I’ve struggled with depression for over a decade and the past year has been the most transformative of my short life so far. My first tentative steps towards a Jewish life were the first steps towards my recovery, though I could not foresee that at the time.

It was a typical weekday morning in August. We were in a CVS parking lot, killing time before my mom dropped me off at work. I fidgeted from the anticipation of telling my mom that I was thinking of converting. How would she react? Would she reject me? Would she lecture me and tell me I was going to hell?

Truth be told, my mother is not religious in the conventional sense. She rarely goes to church, but she faithfully reads her Bible each morning and murmurs quiet prayers before she goes to sleep each night. She never forced me go to church and she understood why I quit going to church after my grandma died. She wanted me to know and trust God, but she also knew that could only come in time and of my own volition. So why was I so scared of telling her that my heart was pushing me to return to God, albeit in a completely different environment?

Out of the blue I blurted out, “Mom, what would you say if I converted to another religion?” She stopped reading her paper and turned to me with a quizzical look.

“What do you mean? Like Islam?” Her eyebrows were furrowed, like she was trying to figure out if I was joking or being serious.

I chuckled nervously. “Um, no, more like Judaism. I’m going to take a class at Temple Emanu-El, that synagogue over there near North Park, you know, the one right next to where Grandma is buried. I just wanted to let you know.”

She squinted at me. “You’re serious.” I nodded, the knot in my stomach growing ever tighter and tears forming in my eyes. “You know Anjelica, I’ve never tried to push you into anything. I know you’ve been trying to find your place and I know how hard that is. As long as you know God, then I don’t care what religion you belong to.”

My mother has always supported me and been my fiercest defender. Despite this, I always underestimate the depth of her unconditional love and support. I have a habit of over apologizing to her when I do something wrong, even if it’s not my fault or it’s a situation in which I had no control. My mother may get frustrated with me and sometimes we fight using sharp words, but in the end we always help each other heal from those wounds.

My extended family, on the other hand, is always in turmoil. My mother refuses to acknowledge her brothers and one sister; she keeps in touch with her other siblings, but even those ties are tenuous at best. I tried to stay neutral and maintain relationships with my aunts and uncles, but I grew tired of their hypocrisy, chastising me for not going to church while stealing and lying to each other, so I’ve cut them out completely. This family I grew up with is one that I try to avoid and sometimes I’m afraid that I’m absorbing their worst qualities.

I suppose I’ve seen my mother get hurt too many times, so much so that I bristle at the thought of disappointing her. My mother is proud of her Hispanic heritage and made sure I learned about Hispanic heroines and role models. She taught me that just because my skin was a little darker, I was not inferior to anyone else. She was determined that I be proud of my heritage and embrace it.

I was worried that when she found out that I was looking to convert from my birth religion to a completely different religion that came with its own (different) culture, she would cut off our relationship, thinking I was ashamed of my heritage. But I shouldn’t have worried. Looking back at my childhood and especially my teenage years, I can only marvel at how she was able to juggle a full-time job while making sure I received the best mental health treatment she could find. She is the backbone of our tiny family, the well of energy that never seems to run dry, the strength that I use when my own is depleted.

She supported me through my tumultuous high school years, always took my tearful calls during three years of college, was always ready to talk me through stress fits during two years of graduate school, and encouraged me to pursue another Master’s degree. I am acutely aware of just how incredibly lucky I am to have her in my life. At that moment, I wanted to tell her how much I loved her, how much her support meant to me, and I was so grateful that she loved me despite my messy, convoluted life.

But words escaped me and the only thing I could say was, “Thank you Mama.” But she understood. She always does.